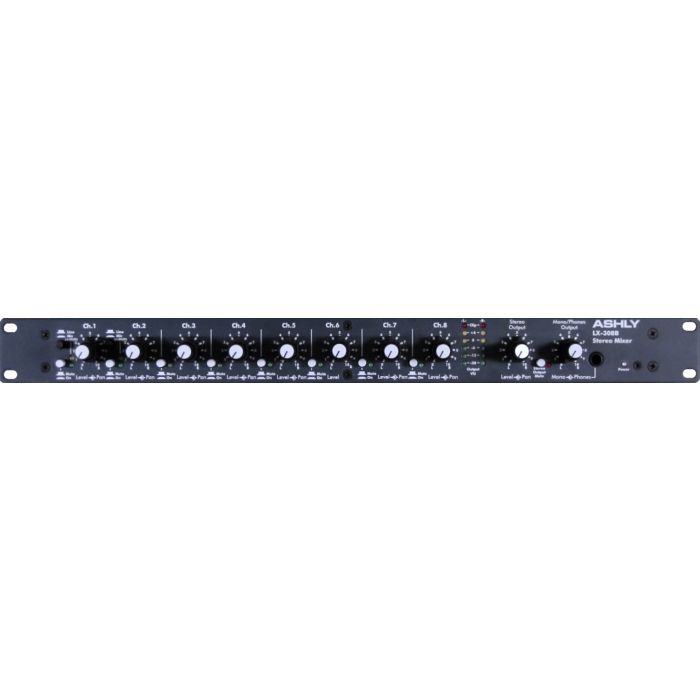 Ashly LX-308B 8-Input Stereo Line Mixer
The Ashly LX-308B is a true stereo eight channel line level mixer (it may also be used as a sixteen channel mono mixing unit). The LX-308B can be used on its own any time stereo line level sources need to be combined together. Some typical applications for the LX-308B would include boardroom sound systems, multimedia sound distribution, broadcast studios, mobile broadcast units, satellite downlink distribution, and live sound reinforcement or studio sessions.

Each input of the LX-308B has a pair of balanced 1/4" TRS line input jacks, with level and pan controls on the front panel. All inputs may be used either balanced or unbalanced. Channels one and two are switchable for mic or line level to allow the use of microphones directly into those inputs without the need for separate preamplification. An input on/off switch with LED status indicator provides for convenient channel muting when needed. Two five-segment LED meters indicate Left and Right stereo output. Green LED's are used below 0 VU, yellow above 0 VU, and red LED's indicate clipping. The Left and Right clip indicators monitor all internal amplifiers to warn of any possible overload distortion.

The LX-308B has both Left and Right outputs on 1/4" TRS phone jacks (all outputs may be used either balanced or unbalanced). Left and Right level controls, variable panning and stereo mute switch are found on the front panel, as is the overall level adjustment for the independent Mono summed output. Stereo headphones may be conveniently connected to the front of the mixer, and this output has its own level control. Pre-Master sub inputs and outputs may be used for linking the LX-308B to other mixers, such as the Ashly MM-508 eight input stereo microphone model.